This morning, over a leisurely breakfast we said farewell to David and Marianne. Contact details have been exchanged and we are sure to keep in touch.

It was they who mentioned the Cite De Pierres, not as you may expect, a town where everyone is called Peter, but a site with grand vistas, some activities and walks.

I’ve never thought of us as walkers. In fact when anyone mentions walkers, I automatically think of the firm that produces shortbread biscuits rather than the process of putting one foot in front of another and producing forward motion. However, we arrived at Cite De Pierres this morning prepared to at least try a short waddle.

The brochure offers various options, you can climb on the ‘via ferrata’ and use the zip wire. I think we considered this for perhaps a nanosecond and moved on to the ‘on foot’ selection, which promised rambles from 30 minutes to 2 hours. There were limitations to our time (and legs) so we searched for the shortest route and set off. At first it was fairly easy going, though I did point out that we were descending and inevitably that would mean an ascent. There were interesting rock formations to view along the way, with luckily rather long explanations to read which gave us a short respite in which to catch our breath and rue our lack of fitness and mobility. 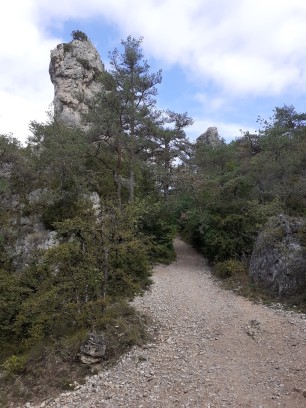 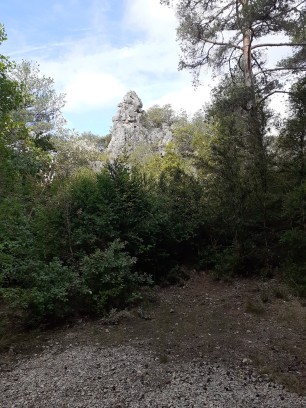 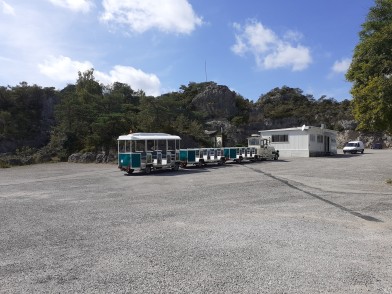 The further we went, the worse the ground underfoot became and gravel paths gave way to stone steps, with varying degrees of height and difficulty. We consulted the map and realised that we could either retrace our steps or complete the circuit back to the car park but by negotiating a more difficult route, which in all probability would include a stop at Everest base camp.

However our salvation came in the form of the sites tourist train. We had considered this option at the start and thought it best not to appear as complete wimps. Not far ahead, we could see that the train (and it’s four passengers) had stopped to look at some intriguing flora. Susie enquired whether it was possible to join the train at this point and was much relieved to receive a positive response. On the way to the loop where the train turns for home we saw that our intended route seemed to disappear then reappear on the other side of a huge rock outcrop before meandering down to the loop. Our legs were very grateful and we sat back to enjoy the ride back, noting with some satisfaction how much of the route we’d covered on foot.

In glorious sunshine, we had a small snack seated at the panoramic viewpoint. Crisps and biscuits rapidly replaced the calories we’d burnt in the previous hour. We’re now back at base camp as it were and will be getting ready for dinner at L’Alicanta where we’ll consume a comfort blanket of food, whilst bathing in the afterglow of our achievement….though that may be sunburn.