It rained again today, which was a little depressing. We had a leisurely breakfast and chatted to the charming American/Belgian couple who booked in yesterday. However, even though we delayed our departure it was still quite dull and miserable when we set off for the Gorges de la Dourbie. The road along the gorge isn’t as steep, winding or challenging to drive along as the road that follows the Tarn. It’s more verdant and gentle.

We were heading for Cantobre, a hilltop village, recommended as worthy of seeing by Adeline, our hostess here. The approach to the village is just off the main road, over a single track bridge and up several swooping hairpin bends. I’m more used to these oddities now but they still require some concentrated negotiation. In high tourist season, the village must be challenging to access. There were one or two overflow car parks lower down but we drove on, trusting that tourists as mad as us would be few and far between and that parking for overweight OAP’s would be close to habitation.

Luckily, I found a slot next to the village recycling centre, though we still had a steep incline to tackle to access the village. Cantobre is quaint and stunningly situated and as far as we could tell practically deserted. There were a smattering of seasonal gites to let but, like Castelbouc no human inhabitants to be seen. 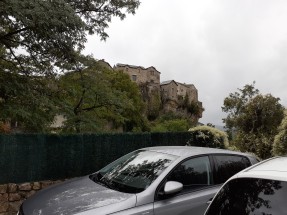 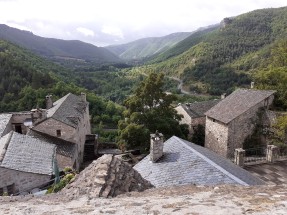 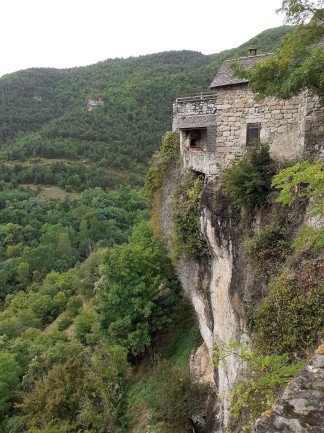 After a short walk round, we left the village to it’s catatonic slumbers and drove on to Nant, a slightly larger town further down the gorge. By this time we were feeling in need of something to eat and stopped at a restaurant with a terrace in the old market halls. It began to rain more heavily and while we enjoyed our meals of shepherds salad and sausage and chips (guess who had that) we began to regret our choice to eat them outside. The arcaded market halls acted as a wind tunnel and we were quite chilled by the time we finished eating. 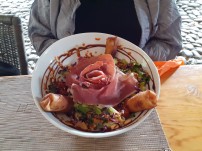 Nant has a few interesting, winding streets, though apart from a bar and two restaurants all other commerces seemed closed, possibly because it was out of season.

To be honest we were both cold and miserable and drove back to the hotel, via the vast military camp at Larzac, La Cavalerie, which seems to be almost totally given over to apartment accomodation for soldiers. We skirted round Millau, crossed the Tarn and missed out on visiting Liacous for the second day. We’ll try and go tomorrow….or Friday.

This evening we had another lovely meal at L’Alicanta, though we were both quite tired and ready for bed when we’d finished eating. The forecast is better tomorrow…it’s difficult to type this with crossed fingers…

2 thoughts on “Castels in the air…”