It wasn’t until I studied a map the other night, that I realised how close we were to Duns. It may not mean much to my readers but Duns is the site of the Jim Clark Museum and given my past love of, and connection with motor sport, it was a must see. It really is super, though quite specialist. Only opened a few days ago, the new building hosts memorabilia from Jim’s remarkable career, his many trophies, a Lotus F1 car and a Lotus Cortina. It also has an F1 simulator, into which I was semi reluctantly shoehorned. I wish I could say I fitted comfortably (perhaps if I lost 10kg) and my skills are only up to two laps of Silverstone, crashing three times, including one which required a simulator reboot. It was great fun however and I’d cheerfully do it again. Perhaps it’s an incentive to go on that long promised diet..

Leaving Duns, we stopped in Kelso, having lunch in one the hotels on the market square. We wandered round after and noticed a stage set up outside the town hall. It appeared that we were present during ‘Civic Week’ and subsequently a quaint ceremony took place which I took to be a form of riding the bounds, a way of marking out the town boundary. There were lots of horses, a police car, an ambulance and a road sweeper, because after horses…. 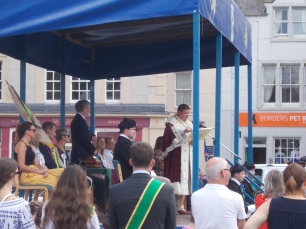 A short drive from Kelso is Floors Castle which exhausted my puns on carpet, lino and tiles. Sadly we were only allowed to see round the ground floor and strictly no photographs of the interiors. There were three super young guides, well informed and very approachable. It’s fascinating to walk round, especially as it’s still a family home. Sadly we arrived somewhat late in the afternoon, and didn’t have enough time to look round the walled garden and to have a coffee and cake. The cake won… 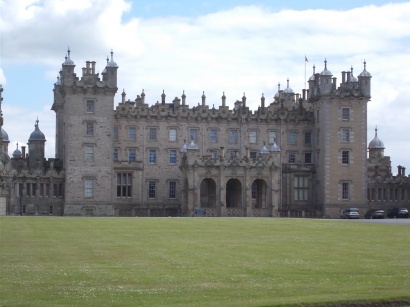 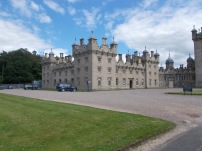 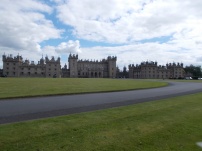 Tomorrow we take to the waves, looking for puffins, seals, dolphins and on Holy Island a sample of mead..Perhaps a ‘full English’ isn’t a good idea tomorrow morning.