Thankfully this morning was dry, there was even a hint of sunshine when we set off for our ‘international’ tour today. Three pretty towns, buy some wine, hop into Spain for a bit, then back into France, sounds easy doesn’t it? Actually it was, apart from the hairpins up and down the mountains.

We began at Ainhoa, a lovely small Basque village with white houses and red shutters. The skies were still mostly grey which muted the colours and sadly, I was impressed but not wowed by the setting. A quick walk round and on to Espelette, white houses, red shutters but additionally red peppers hanging on the exterior of the houses. Espelette has a pepper festival in the Autumn, after the pepper harvest, and well, it was a bit touristy….and white and red…

We had to drive a little longer to reach Saint Etienne De Baigorry where we hoped to buy some wine. We stopped and had a quick lunch in one of the bars, which for some reason was painted white with red shutters. I think it’s only fair to point out that some buildings are white with green shutters but it must be awkward giving directions. “You can’t miss us, we’re the house with the red shutters”. 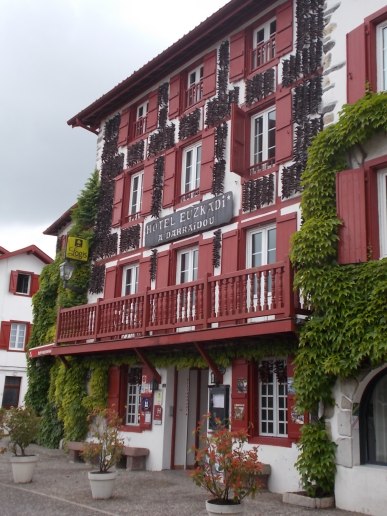 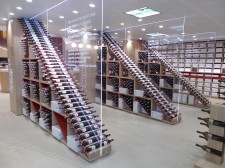 After lunch (incidentally, the bar had some of the cleanest loos I’ve ever seen) we got directions and arrived at the ‘cave’ or wine store. Susie sampled some red and I, some white. Choices made, we bought six of each, plus a local cheese and got a free corkscrew from the really charming young manager of the ‘cave’.

Now, for the perilous mountain passes over the border. Well, I suppose that may be overstating matters but it was quite a challenging drive to the very top of the Col d’Ispeguy (672m) where in the parking area a bus had just disgorged todays load of tourists. It is a wow spot, though we only stopped long enough to take a few photos.

We wound our way back down the Spanish side of the mountain and Charles kindly took us on the road back to Sare. Crossing from Spain back into France we drove through Dantxarinea, which contains multiple roundabouts and multiple retail outlets.

After a couple of hours back here, we drove over to St Pee-sur-Nivelle for a lovely dinner at Ttotta. Yes, you read that correctly. I think originally it was called Totta but the signwriter had a stammer and it was going to cost too much to redo so they just left it as it was.

Well tomorrow, we drive to our last destination on the Il de Re. Yes, it’s by the sea so I’ll be breaking out my bucket and spade…