Yes, I know it looks odd. The more astute of my readers may have already ascertained that it’s the famous phrase, ‘My hovercraft is full of eels’ of Monty Python fame. The reason it’s here goes back to this morning and breakfast at our hotel in Mutriku.

Mutriku is in the Basque region. Many locals speak Basque as well as (or in preference to) Spanish. Susie chatted to the owners wife who told her that Basque was taught in all the schools. It’s a strange language to look at on the page, with words containing many X’s and Z’s. Apparently there are a few Arabic words in there too, a throwback to the Moorish invasion of the 8th Century, which reached as far as Pamplona and the foothills of the Pyrenees….breakfast was excellent too, with croissants hot from the bakery.

Our flight to Jerez didn’t leave till early afternoon, so we decided to stroll round the harbour in Mutriku. The dull, drizzle of yesterday had gone and we were treated to warm sunshine. Mutriku is delightful and we’ve put it down for a second visit… 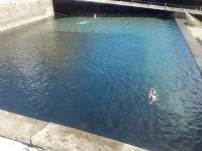 (The feral cats are especially for Iwona, our Polish friend).

Returning to the car we drove to Bilbao Airport (via the motorway!!). We’d arranged to have the car collected by a private parking company and were a little nervous about what sort of operation they were. However, a quick telephone call after we parked up near the airport and an employee was dropped off to collect the car. Smartly dressed and armed with a clipboard he noted the kilometre reading, checked our details for the return and even gave us a receipt. I don’t think it was a bill of sale…..

The flight to Jerez was not full and only took just over an hour. Despite meaning to leave two waterproofs in the car, I neglected to remove them from the backpack, so we’re now stuck with them until we return to Bilbao…oh well, they may keep the rain away. We were collected by Jorge, from the apartment rental company who dropped us off at the apartment rental company. They took a scan of my passport and after signing some paperwork, we got into our 4th floor apartment. There was no password for the wifi so a little stroll back to office was called for. We got lost on the way back, which admittedly was after a mojito and a beer, though we found our way to an Art Nouveau tapas bar. A five minute stroll with the aid of a larger scale map brought us back here. 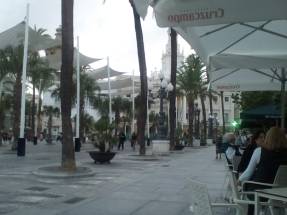 Tomorrow we’ll explore further and do battle with the 5,000 tourists that Jorge delighted in telling us were expected from two cruise ships docking early on Wednesday….