We began this morning with a spring in our step…no, that’s a lie we dragged our limbs up to Saesons where we had a buffet breakfast. I’m not one who relishes big breakfasts, so an ‘all you can eat’ buffet is a bit lost on me. Not so one of the hotels guests, who I swear filled his plate three times. We chatted to another one of Saesons’s charming staff, Alexis from Costa Rica. I don’t know what the interview/staff training process for this chain of hotels is, but it obviously works…

Why we ended up walking through Tiergarten I’m not really sure, given how we are both in need of bath chairs and attendants. However, we got up there by way of the Bahaus Archive, some really posh flats and a few large embassies. 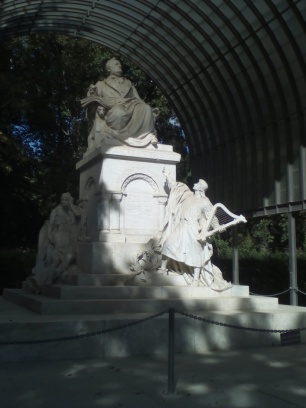 Tiergarten is quite Hyde Parkish. though perhaps not as full of open green spaces. We saw a man who appeared to be in the nude practicing yoga. (I really didn’t want to get closer to find out), tourists on bikes, Berliners jogging (it’s the Berlin Marathon next weekend) and even a man by the lake who’d slung a hammock between two trees and was dozing peacefully. Yes, I think it really is that laid back here.

After hobbling from bench to bench, we cheated and caught a taxi back to Potsdamer Strasse. A quick check in at Oliv for soup, water, coffee and cheesecake, separately not in the same bowl, we made it back here to have an hours rest before our last dinner in Berlin….I promise you, curry wurst is not on the menu….