Well, not a disaster really…….

We began today with an alternate way of taking our stroll down to the harbour. Instead of negotiating the multiple roadworks, we crossed both arms of the river down here and walked up the other side. It was interesting to see something of the Gdansk suburbs and the vestiges of Communist era social housing. It’s obvious that the River Motlawa is a major resource for leisure, both for visitors and locals. On our way up to the harbour we saw people canoeing and of course, the river is used by tourists and sightseeing tour operators as well.

We thought a walk round the central harbour island was in order, even though it’s being heavily developed and a new Holiday Inn hotel constructed. We stopped a few times and as we turned the ‘headland’ we found someone sat by the harbour rail with a clipboard and video camera. It transpired there was a dragon boat race taking place and we stood enthralled as the crews drew up under one of the bridges and paddled furiously for about 150 metres to a finishing line almost underneath us.

We watched a couple of very close races, then wandered up Duig Targ (the main tourist street), cut across in the middle and back down to the harbour. We leaned on the harbour rail for a minute and noticed one of the dragon boats had become waterlogged in our abscense. The crew were bravely trying to stay aboard but the harbour patrols came to their rescue and most of the paddlers climbed up a ladder on the harbour wall to safety. 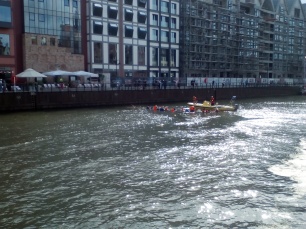 All this excitement made us hungry. Well actually it doesn’t take much to make us think of food and luckily we were headed for lunch at Ritz which is run by Basia Ritz, winner of the first Polish Masterchef TV program.

The cuisine is simply superb. It was inventive, with clever flavour combinations and textures. In short, beautifully presented plates of magic. I’ll let a few pictures do the talking. 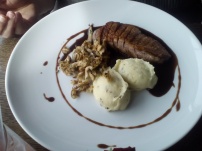 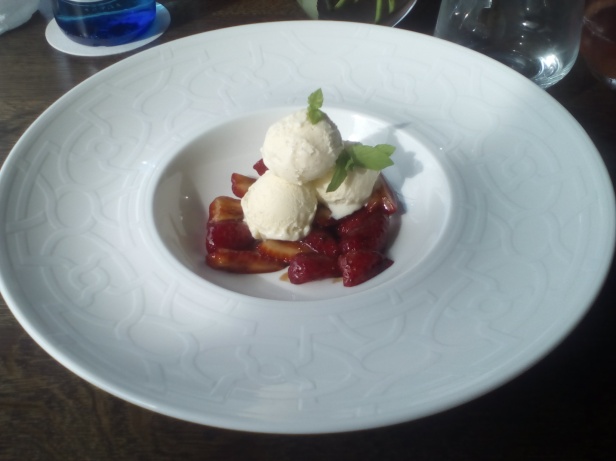 We met Basia towards the end of our meal. What a charming, intelligent and talented lady. Her restaurant and staff do her great credit…

We wandered round to the pedestrian bridge which we crossed (luckily it was down at the time) and waited for the water tram to take us back to it’s terminus, which is but a short walk from our apartment. We’ll be using the tram in the other direction tomorrow for our last excursion….