Partly it’s our fault, picking an apartment that although by the river, is a little walk away from the city centre. I’ve never seen as much construction, both new build and renovation in a city before. Everywhere you turn there’s a tower crane spiking the skyline. During the week, the noise is constant. A ten minute stroll into the city centre involves negotiating dug up old and newly laid paving, clambering over kerbs and finding your way through a maze of protective mesh fencing. Sounds horrific doesn’t it?

In a way it is, but Gdansk is worth gritting your teeth, and wearing a hard hat for. OK, a hard hat isn’t supplied by the tourist office but it would make you feel part of the city. This morning, after a cafe breakfast we wound our way to the ‘Green Gate’. We looked again at the mini London Eye and decided that the duration of the ride outweighed it’s cost…my vertigo may have been influential too…

To the east of ‘Green Gate’ lies Granary Island and to the east of that, split by one leg of the Motlawa River is the marina and a few up market hotels. The island is one mass of building work, mainly new apartments and a hotel. We’d found a nice looking restaurant and popped in to book a table for lunch tomorrow. Susie asked the waitress whether the new apartments were sold to Poles or foreigners. Her surprising answer was that they were mainly sold to Norwegians. I think it may be Scandanavians in general, given how many ferry links to Gdansk and Gdinya there are, and the proximity of the airport but it’s sad that this housing is only affordable to residents of other countries. 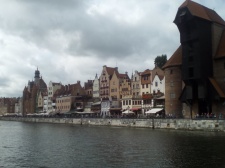 We strolled on, past the Gdansk Philharmonia building, and Gdansks ‘Hollywood’ sign. We paused at the raised pedestrian harbour bridge while it waited for ships entering and exiting the harbour, including the rather strange ‘pirate ship’ which we’ve studiously avoided boarding. We called into a French run cafe and had a brief (and it has to be said, uninspiring) late lunch. We enquired about the times of the boat to Westerplatte, which takes in a sail past the shipyards. It really wasn’t convenient to go and I think we may well be trying the ‘water tram’ instead….it depends on the weather tomorrow..