Yesterday we’d arranged to meet up with our young friends German and Monica, on ‘their turf’ in Tarragona. To get there, we took a train from Passieg De Gracia.

That does sound simple and in principle it is. However, when you change from metro to train at PDG, it involves lots of walking up and down stairs and a long stroll along an underground corridor accompanied by an accordian player who only knows the melody to ‘Che Sera, Sera’. The accordian player isn’t compulsory but the corridor is. However we eventually located the RENFE ticket hall, bought a couple of returns and found our way to the platform (whoopee – escalators!!)

We had a short wait for the train and just over an hour later we were being greeted on the platform at Tarragona by our friends. Tarragona is a medium sized seaside town, with several beaches and, up the hill a lively central commercial area with an indoor ‘mercat’ and long rambla or pedestrianised area. There are well preserved Roman remains and some interesting architectural buildings. German and Monica were keen to show us their new apartment, which we found delightful and then took us for a stoll round town. We had a lovely lunch in the older area of Tarragonna and wandered back to the station, saying our farewells and catching the train back to Barcelona. We really enjoyed our day out and it was a refreshing change from the hustle and bustle of Barcelona. 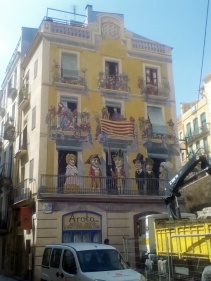 So, this morning we are preparing to leave. We are always sad to say goodbye to Barcelona but know we will return, as it’s a city we love. And now….onwards to Girona..