You may be able to detect from todays featured image, that this morning dawned grey, overcast and rainy. It gets light here at a very sensible time, about 8:15am. The temperature had dropped quite significantly and I actually had to put a light jumper on. Because the weather was so uncertain, we only ventured ten minutes walk away, to the Museum of Fine Arts, a gallery showing works by Julio Romero de Torres and Posado Del Potro, which houses a flamenco exhibit. The Fine Arts museum was frankly overburdened with heavy religious paintings, though we used the elevator, which was made by Schindler, hence ‘Schindlers Lift’…well it made me laugh, which is more than the exhibits did.

Julio Romero de Torres is a different thing altogether. True, there are religious influences in some of his works but in the main they are female studies with flamenco connections. Some of the canvases are stunningly beautiful. 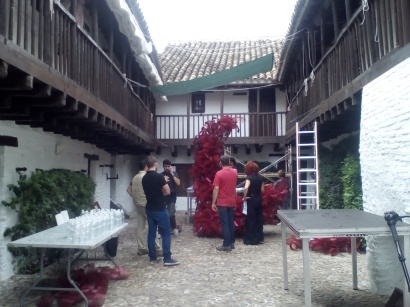 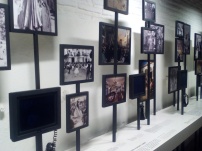 Sadly I wasn’t able to take any photos in the exhibitions but could in the Flamenco museum. This has an interactive part, where you can practice your tap tempo and lots of small LCD screens, some with earpieces to listen to the Flamenco vocals. In the courtyard they were constructing an art piece representing a flamenco dancer. They were expecting quite a crowd judging by the number of water bottles on the table.

It was after 1pm when we left, so we stopped off for a quick beer and a non alcoholic mojito, then we trundled off towards Cordoba. We wandered into the Jewish quarter, searching for a statue of Maimonides, a Jewish philosopher, doctor, teacher and rabbi from the 12th century. Susie wanted her photo taken with him.

We found our way into a market, though it was similar to the one we discovered the other day, in that there was a central seating area, with food outlets on the outside. You chose one, placed your order, sat down and they brought it to your table. I have to confess crisply fried strips of aubergine, drizzled with honey and balsamic vinegar are becoming our fast food of choice. Today was no exception.

By this time a lot of the heavy cloud had lifted and the temperature was climbing rapidly. Time for our siesta, so we wandered back to the apartment. Tonight we are returning to Garum 2.1 (unless their software has had a revision). Tomorrow we leave Cordoba by bus for Seville, will have lunch there and catch a flight to Orly which doesn’t get in till almost 11pm. I doubt I’ll have the energy to write until Friday, when we get back home, so you’ll have to wait for our thoughts on Seville and Cordoba till then…adios..

3 thoughts on “Berenjenas with everything..”