This morning we met Paulo and Dominic for breakfast and introduced them to the delights of Pan Y Pui. We said a fond adios to them, the bakery owner, his staff and ultimately Seville. Seville is a beautiful city and we think it is worth going back to..if only for the chocolate croissants…

We arrived by taxi at the coach station, located which bay number our coach to Cordoba would depart from and waited. Then it turned out the coach adjacent to our bay was the coach we needed, luckily we found out well before it went. Two hours and another taxi ride later we were here. Our apartment is called ‘Petitgrain’ and has orange trees growing by the side of the road outside our window. It’s delightful and we have a small private patio. 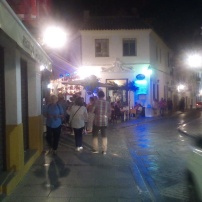 Susie had booked an after dusk tour of the Mezquita, I managed to take one photo inside the courtyard before being told that photos we not allowed….

The tour was very atmospheric, as they illuminated the interior as the guide walked us through. I found the mosque much more interesting than the later Christian additions, which seemed rather out of place. We exited an hour later and made our way to the restaurant where earlier we’d made a reservation. The meal was good though we were both almost falling asleep over it. Neither of us could face dessert, which just proves how tired we were….and on that note, I’m off to bed….