I’m not a real fan of long coach journeys. Especially when they involve getting off and on several times and exclaiming ‘oooh’ and ‘ahhh’ at the scenery that’s presented to you upon alighting the steps. I must admit though, that most of the scenery today would pass the ‘oooh’ and ‘ahhh’ test with flying colours.

We were booked on a guided tour of the ‘White Villages’, Zahara de la Sierra, Grazalema, and Ronda. All of these are in stunning situations, and worth getting up at 7:15am to go and see. However, I can’t let the day go past without my own small observations and criticisms. First a few images to give you a small flavour of this stunning part of Spain. 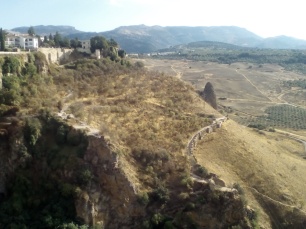 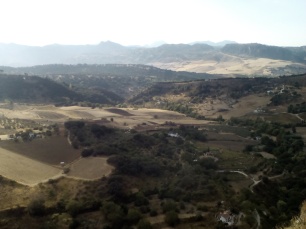 Zahara is a small village tucked away on the side of a cliff. It’s obviously very popular with tourists and the small central square soon filled up with cars. Local bars and restaurants broke out the seats and tables as soon as the tourists flocked in. We had two of the strongest expressos ever!!

On we drove to Grazalema, where they were holding a Fiesta. Luckily it didn’t involve throwing tomatoes at each other or doing unspeakable things to donkeys. Personally, as I hate crowds, I think I suffered enough without those to add to the experience. The Fiesta was jolly, lots of locals enjoying themselves with quite a few in local costume. There were even two guys dressed as 19th Century soldiers complete with authentic rifles. I can’t help but imagine them as extras in another Zorro movie..Our coach driver managed to thread his way back into the village and scurry us off to our last village, though at 30,000 population, really it’s a town.

We arrived in Ronda (not The Rhondda obviously) hot, tired and a bit late. Our Spanish guide, who bless him wasn’t possessed with the loudest of voices, explained (I think) that he couldn’t give us a tour of the old town centre because guides that weren’t local aren’t allowed to take tours. So he left us to look round ourselves, nothing to do with the fact we were running an hour late.. The view from the edge of the cliff, which is partly on top of the old city walls is simply breathtaking. Time constraints, dehydration and tiredness deprived us of exploring further, though Seville and the area surrounding it, has been earmarked for future exploration.

The sun had set by the time we were dropped off the coach back in Seville. We were both ravenous, so we called in to what has become our local tapas place, ‘Bar Europa’ and topped up our tummies. Tomorrow we are off to a market on the other side of the river for a cooking course….I have first dibs on the dessert…