We had two ‘sights’ in mind for today. Amazingly we managed them both with only a minor ‘map orientation issue’. First stop was the former Tobacco Factory, which now houses the University of Seville. Academia seems to have varnished over most of the factories past, it was rather bland and without atmosphere. Perhaps expecting dusky maidens to be seated rolling cigars on their thighs was a tad too much….

Next we stopped for a drink break…proper drinks you understand, a Cervezas for me and a rather potent Mojito for Susie. Wobbling ever so slightly we made our way to Plaza de Espanya, a very elaborate crescent of buildings, with a large plaza in front, a fountain and a small canal, on which you could hire and row a boat. Before you ask, no we didn’t. 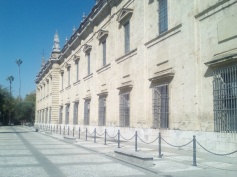 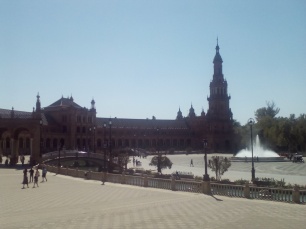 The plaza is spectacularly well done, especially the tiled benches on the lower levels, as shown by Susie in her best ‘Sale Of The Century’ pose. The keen eyed reader will notice we picked Barcelona as the featured segment. There’s more than a hint of ‘Disney’ about the place, stunning though it is.

We wandered back to the apartment, stopping for orange juice (a very reasonable €1 per glass) all the while wilting in the heat. After a siesta we went out to find Estrella, a recommended tapas bar. I omitted taking the map, so after asking the way we arrived at a set of tables which were placed along one side of a pedestrian alley. The tapas bar was some way off and the two waiters were kept busy taking orders, bringing food and drinks whilst covering the distance of a half marathon each evening.

We had a party of Americans arrive and wanting to be seated together managed to disrupt the pedestrian flow for about 10 minutes while tables and chairs were moved to accommodate them. Our meal came in between, which was excellently cooked and presented. Then a family group of four adults, three toddlers and a baby turned up. More moving of tables and seats and another pedestrian blockage. The Mum with the baby was getting more harassed as she was trying to control the toddlers too, whilst her husband was more intent on sitting down, having his drink and staring into space. Luckily we had finished our meal, so we asked for the bill, paid and left. I love children, I really do…just not after a long day exploring….