Our outing today began at 10am, on the far side of Old Town Square. Getting around the popular parts of Prague means dealing with what appears to be half the population of China, walking in long crocodiles behind guides holding aloft the obligatory furled umbrella. They walk with little regard for other pedestrians or traffic and do so noisily. Like we found in Barcelona, tourists can be Hell.

Outside the Cartier shop, we met our guide Ian. Born in Brazil but resident in Prague for five years and named after the lead singer of Jethro Tull, Ian was a bit of a character.  He rounded up his 26 charges for the day and marched us off (and I mean marched) over the other side of the river to board our coach for the 75 minute ride to Kutna Hora.

Silver had been mined in Kutna Hora from the 12th century. The silver was also turned into coins which were struck in the town. One of the highlights of the tour was a visit to the Sedlec Ossuary, a collection of tens of thousands of bones, some of which had been ‘tastefully’ arranged into artistic objects, displayed in the crypt. The largest of these was a huge macabre candelabra…… 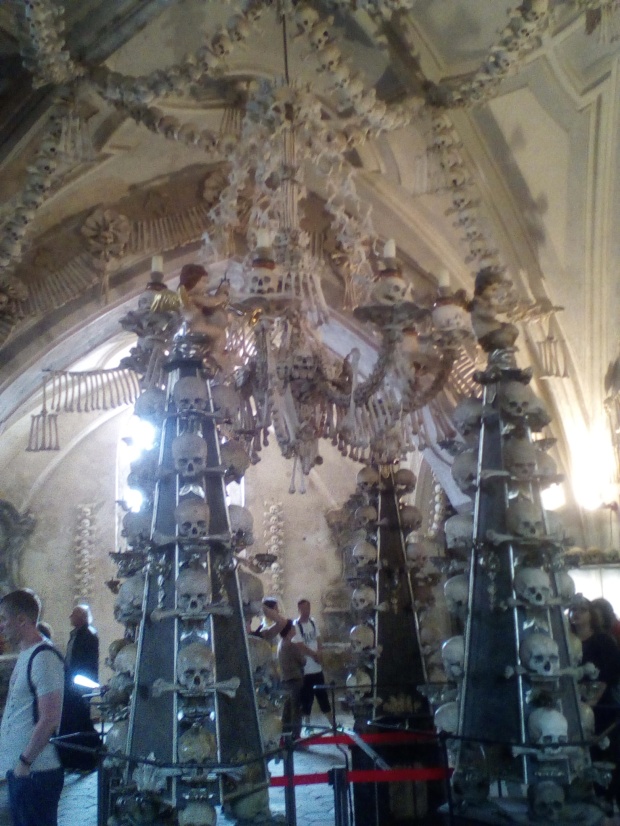 Although fascinating, it’s not a place I’d want to keep coming back to. We visited more churches and other historic sites before stopping for lunch. I had a Czech meal, wild boar with ginger dumplings. I’d post a photo but I don’t want to ruin our reputation for only sampling fine cuisine…

We were all tired and hot by the time we returned to the coach for our return to Prague. I think most of the coach slept on the drive back, no doubt aided by heavy stodgy dumplings…Susie was sensible and had a goats cheese salad..The coach dropped us off on the other side of the river and we made our way back, pushing as many Chinese sightseers under the wheels of the horse drawn tourist carriages as we could. One product of our day was the joint decision to cancel tomorrows walking tour of Old Town. Not only would we find it difficult to keep up and subsequently hear the guide but there are only so many ‘tourists’ you can assault before attracting the attention of the Czech police..

A couple of hours later and we were ready for our dinner at Chilli Point. Luckily this is barely a two minute walk to the opposite side of Havelska. The food was excellent and as you might expect, a bit spicier than our normal choices. This is Susie’s starter of King prawn,  Kadaif dough, baby spinach, wild garlic, tomatoes and a prawn mousse, prepared with a Rawit chilli..

The whole meal was excellent, as was the service and I think we may be back next week. Tomorrow will be what some tour companies used to describe as a ‘day at leisure’. We’re going to do our own tour of Prague and try to fit in a scenic boat trip on the river….with a meal or two, possibly….probably..