It wasn’t really tea and surprisingly, not really Mussolini either…….

Let me take you back to last night, when we had dinner at Somodo. We struggled to get there on time, mainly because we were still on Girona distances. Barcelona is a much larger city and though easy to get round the maps are a somewhat smaller scale.We were met in the restaurant by a Japanese chef, who seemed slightly confused and was consulting a large tome with handwritten notes. Eventually he located our reservation and showed us to our table. Actually he sort of pointed vaguely in the general direction of a free two person table.

He gave us menus, which showed two choices. A nine course ‘Somodo’ menu or a smaller seven course ‘Light’ menu….. 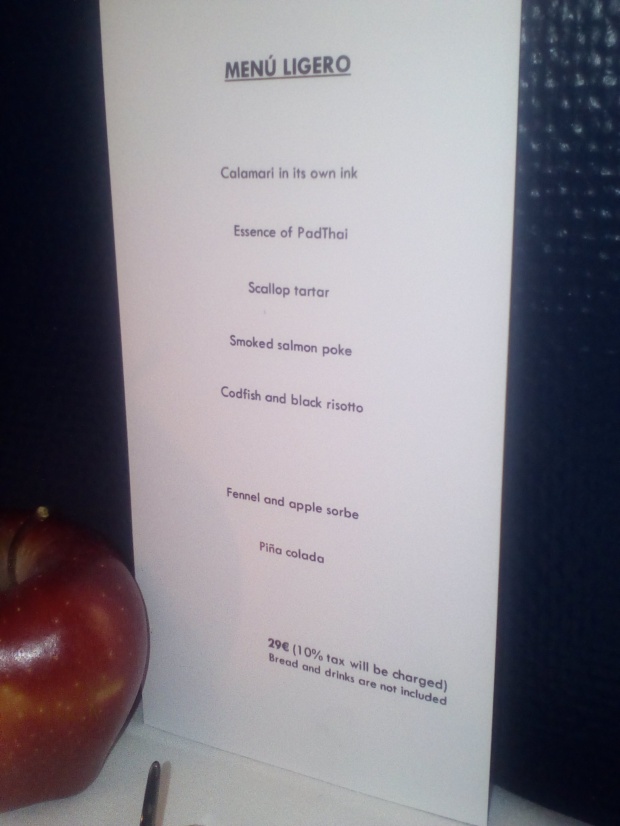 We chose the light menu and the Japanese chef/waiter popped the above aide memoire on our table. We’d just settled down and ordered some drinks when a rotund Italian looking guy in chef’s whites came through the front door. He marched straight up to our table and said to me ‘Senor’ in a questioning tone. Susie took over and after explaining that we had actually booked he turned on his heel and left the restaurant, never to be seen again. Mussolini has left the building I thought. We were finding the whole evening a little bizarre to say the least.

The food was nevertheless brilliant. The Japanese chef (who also served) warmed to us as we were complimentary about his dishes. However, I think he needs a refresher course in how to serve. Leaning across people, taking away a plate when the other person at the table hasn’t finished, overall appearing a bit curt and almost grumpy. Somehow his manner almost added to our experience. At least he took time to explain each course and warmly shook our hands when we left.

It was almost midnight by the time we got back to the apartment and we fell asleep to the sounds of Gracia, scooter exhausts echoing off narrow streets and people walking home laughing and chatting, which is all part of it’s charm.